Android Upgrade - and a problem with restarts - what to do

Upgrading to a new version of Android, it's a process, which almost anybody has to do sooner or later. Or at least the more experienced users need to do it to keep their smartphone or tablet up to date. Whether you are upgrading to the version 4, 4.4, 5, 6 or 7, it can always happen that you encounter a problem. And I came to one as well - to endless reboots. But problems must be solved. So... 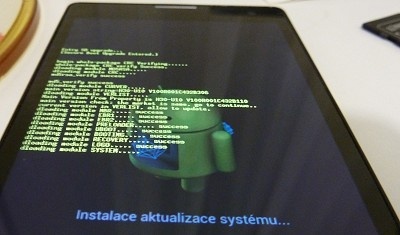 With the second SD card the Android upgrade went smoothly, no problems.I upgraded my two years old smartphone Honor (yes, it's Huawei) from Android 4.2 to Android 4.4. It may look like it's no big leap, but many applications are not running on the version 4.2 and run on 4.4, so it makes some sense. Better would be, naturally, to upgrade to the version 5 or to Android 6, but I wanted to use an official ROM, because the unofficial ones have often some troubles, like malfunctioning or poorly functional camera, Wi-Fi and the like. At least, discussion forums say it.

But back to the upgrade (and even though my problem is mostly about the mobile phone Huawei Honor, I have no doubt that the same problem may occur with other brands, whether you have Samsung, Lenovo, HTC, Acer or Alcatel). I backed up contacts and allowed to synchronize with my Google account, where I backed up the greater part of the rest of the data. I downloaded the official ROM, unzipped the file UPDATE.APP and copied it to the folder dload which I created on my micro SD card (SDHC, more precisely, it's a 32GB card) and in the setup menu chose the Update item, Update the system, Back up the data etc. And here came the Android update problem.

My smartphone has rebooted, while displaying the logo, but instead of upgrading, it rebooted again... And again. And again... No Android upgrade started, just the logo and reboot. And again. Eventually I had no other choice but to take out the battery and to try to find the cause.

More steps to upgrade and...

Long story short, after checking the SD card, from which I upgraded the system (in order, properly formatted to FAT32, readable, writable, without errors) I finally reached for my old eight gigabytes card. I coupied the same file UPDATE.APP to the folder dload and started the same procedure to try if the upgrade may work now. And - this time - everything went smoothly. I have to add that the cell phone officially supports cards up to 32 GB and after the upgrade (and before it as well) it was able to read and write to the 32GB card without any problems. Only he did not do the upgrade to a higher version of Android with this card.

Is not it time for some hasty conclusions, it will still need some tests. But I had to write this short note - as someone maybe is fighting with the same problem when upgrading to a new version of Android right now. So - if this is the case with you or your friends then keep in your mind that the big capacity of the SD card may be the cause of the problem. And when upgrading try a smaller one.