Amazon Kindle: How to repair your Kindle when it freezes or restarts

It is a surprisingly common complaint from many Amazon Kindle users: Their e-book reader restarts / reboots itself frequently - sometimes every time they turn it on - or it is frozen, unable to start working. I had both of the problems - and solved them successfully. And I will tell you how. I hope it will help someone.

When the Kindle freezes and does not work

Before you possibly try to repair your Kindle, read the warnings at the end of this text. Thank you.

So, let's start with the problem number one: When the Kindle freezes and does not respond at all to anything. My Kindle was just switching on/off the green/yellow diod at the on/off button. And that was all. I must admit that it was my fault - but this may not be your case. My Kindle was restarting often and I wanted to solve it by using a new firmware - which installed wrongly - and my Kindle was bricked. I had to use another solution later (more about it below).

Then how to repair the frozen Kindle?

My problems concerned the Kindle 3 (Kindle keyboard), but similar solutions exist for most other versions of Amazon Kindle reader (Kindle 4, Kindle 5, incl. Paperwhite). Unfortunately there are some advices on how to repair the Kindle on the web, but no one I found was covering the problems you may encounter.

So: If the Kindle is frozen and does not respond to anything then it makes sense to try to refresh its (probably spoiled) firmware. This can be done by two methods - using either Kubrick software (a Linux distro with other software, which you can burn to a CD or upload to a flash disk) - then you restart your PC with this system and follow the instructions, or using Freescale Advanced Tool (FAT) and the appropriate firmware file. Both procedures are well described here - Kubrick and here - FAT.

Regarding Kubrick (Kindle Debrick Tool) - it was not doing much better. My experience? In all three PC it booted, the Kindle has been found (sometimes with some hassle), the firmware update begun and sometime later the software came to the conclusion that the update is done, showing an optimistic green stripe. But it was not done (the process usually ended after 20 - 40 minutes, the full firmware update would take much longer). The result was that my Kindle has changed from the restarting state to a bricked one.

How to fix the frozen Kindle

And now the solution: I took out my very old PC - for about 10 years - with Windows XP and USB 1.0. Kubrick has started here, but failed over again. (I should add that all of my "experiments" were repeated many times, I really did not give up after first failure.) So I tried to install the Freescale Advanced Tool - and voila - the first attempt to upload the firmware was succesfull. My Kindle was debricked!

So I can say: The solutions with Freescale Advanced Tool works, but you need to use the right computer. For me it was the old one with Windows XP and USB 1.0.

This method should work not only with Kindle 3, but with Kindle 4, Kindle 5 - incl. Kindle Paperwhite). In my case it definitely worked, my Kindle was live again - but the problem with restarts has been not solved this way. So - what now? The firmware was probably not the problem.

How to fix the restarting/rebooting Kindle 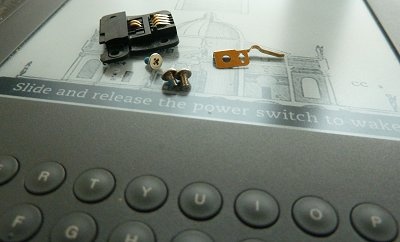 My repaired Kindle - with some things taken from inside out.Now I have seen only one solution - to open the Kindle reader. It's easy - you just need a very thin tool (knife or thin screwdriver) to get in the groove on the back - between the rear cover and the frame; push them lightly apart, back cover pushing lightly out. So you do around the Kindle, except where the buttons are. And the Kindle is opened.

And now - I was shocked! Three screws that hold the circuit board in place were dislodged and freely roaming the device. (Well, more precisely: Three of many screws.) It is clear that the metal screw on the circuit board can make a nice mess. So I screwed them back in place and for sure i checked all other visible screws as well.

And when I had opened Kindle, once and for all, I solved the problem with the original case as well (maybe you know about it - the Amazon case for Kindle sometimes short circuits the battery so it is recommended to isolate the paws which hold the Kindle in the cover; my isolation was scratched so I decided to remove the electrical contacts that lead to the cover - I just took out five screws... And now I can still use the original Kindle case without the risk that I will short out the battery (but sure, I can not use the cover with lamp now, because it needs the electricity, which was just cut off by this move)).

And now - I closed my Kindle. I just placed the cover to its place and pushed carefully.

After this operation my Kindle reader has now been running for 14 days as new - and I hope it will do for many years to come. No reboots, no freezing. You really would not think that the problem could be caused by loose screws - I haven't seen something like this in any device I met in many past years.

So hopefully this experience helps someone else as well.

Important notice: All of the above operations may be risky - if you decide to do them, you do them at your own risk. Author can take no responsibility for any damage the procedures mentioned above may couse.